For the past 14 years, Ponemon Institute has released reports on the costs associated with a breach. This information is incredibly valuable for all security practitioners because it informs budget, areas of focus, and return on investment for security initiatives ; including information specific to your industry vertical.

Average total breach costs are based on a data loss equivalent to 10,000 records of data, comprised of PII, PCI, PHI, and Intellectual Property.  Total breach costs in the past 4 years initially declined, but has climbed back to 2016’s high of $4 million.  That’s a global average; in the United States, average breach cost in 2019 was $8.19 million. 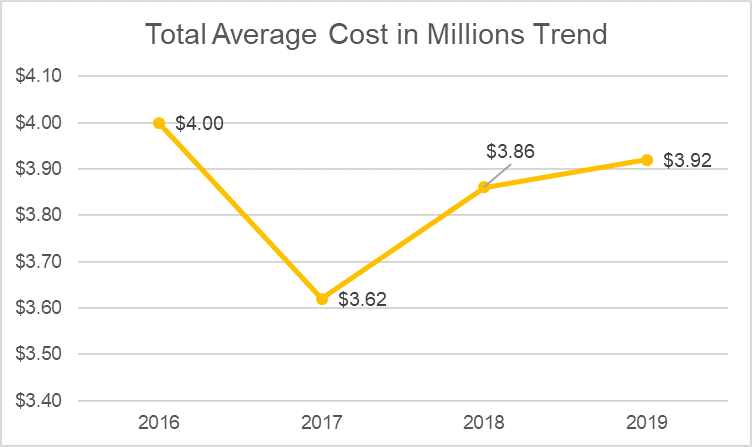 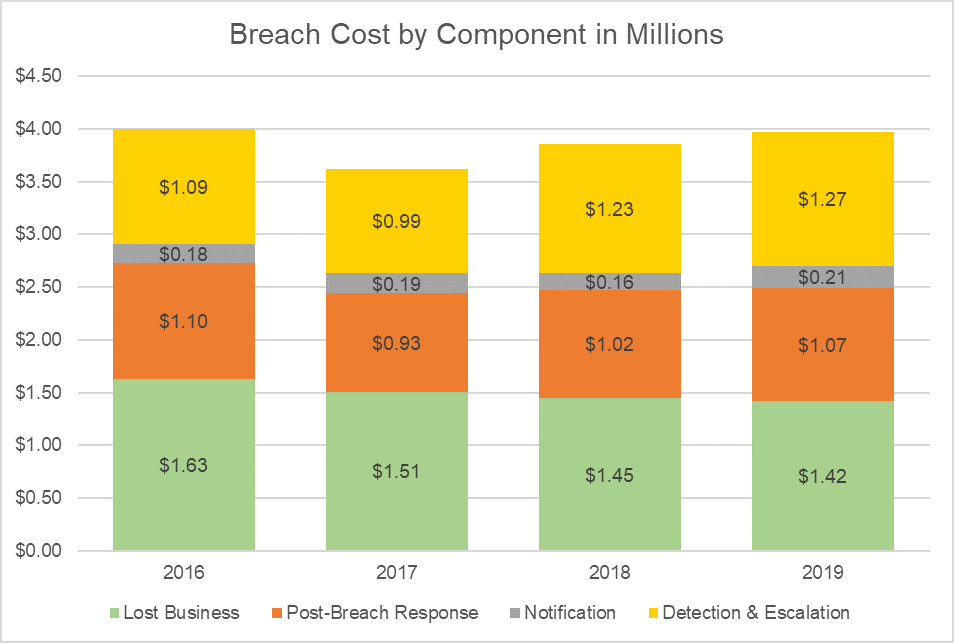 Among the most interesting of information contained in the Ponemon report is prediction of breach probability.  Based on the experiences of over 500 companies in their research, breach probability is based on the number of data records lost and the country or region of the incident.  In countries such as South Africa, India and Brazil, the likelihood of a breach occurring in the next 24 months can be 40%; the global average is 29.6 % for a loss equivalent to a data breach of 10,000 records.  Breach probability has been trending up over the 14-year span Ponemon has conducted this research. Root cause is evaluated in three categories:

While incidence of Malicious or Criminal Attack has steadily risen over the years, Human Error has decreased, as has System Glitch.  Threat Actor activities result in higher breach costs than the other two categories. One of the more fascinating and valuable metrics from the Ponemon report is Per Capita Cost.  This is the value of a single data record’s loss, split out by industry vertical, and allows for computation of breach cost exposure and probability by enabling assignment of the cost of a single record’s loss to the 29.6% likelihood of a breach of 10,000 records.  For example, in the health vertical, that figures out to an average breach cost exposure of $4.29 million, twice the exposure of the Financial vertical.

It’s very interesting to note that while the Health vertical’s per capita cost has steadily risen, most others show only modest increases or declines.  The past 4 years show a 27% decline in per capita rates overall.  At the same time, total breach costs and malicious activities have steadily increased. 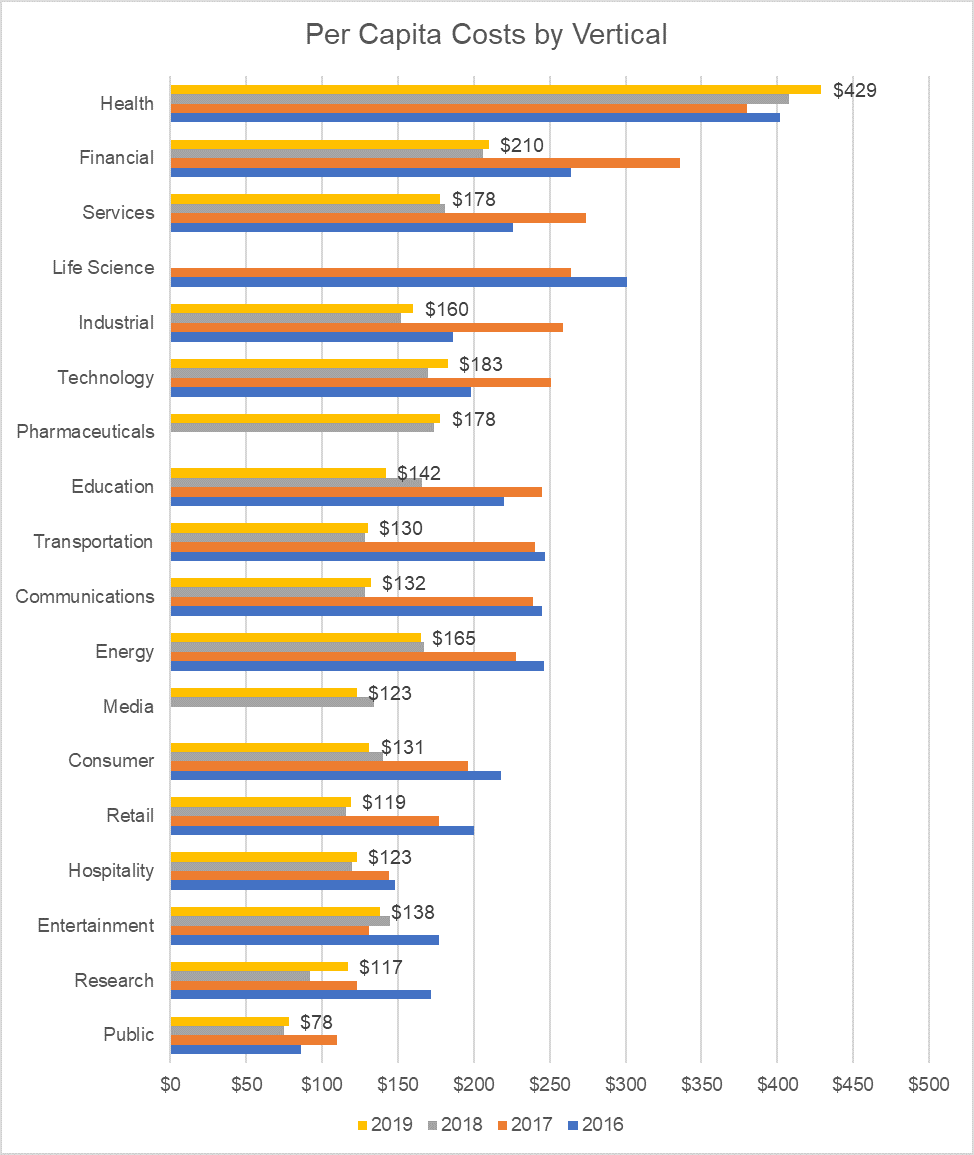 Among the most valuable metrics in the Ponemon report are the ones detailed below, because you can compare them to your own security maturity and strategy to prioritize what initiatives to tackle.  For example, continuing the 10,000-record loss idea as a baseline, establishment of an Incident Response Team saves you $13.66 per capita, reducing breach cost by $136,600.  Extensive use of encryption and having a solid Business Continuity Plan saves another $258,400.   The more records lost, the more these activities save.  Consider the possibility of a mega breach of 1,000,000 or more records – those same 3 activities represent a cost reduction of over $53 million — the financial viability of these activities becomes very apparent. 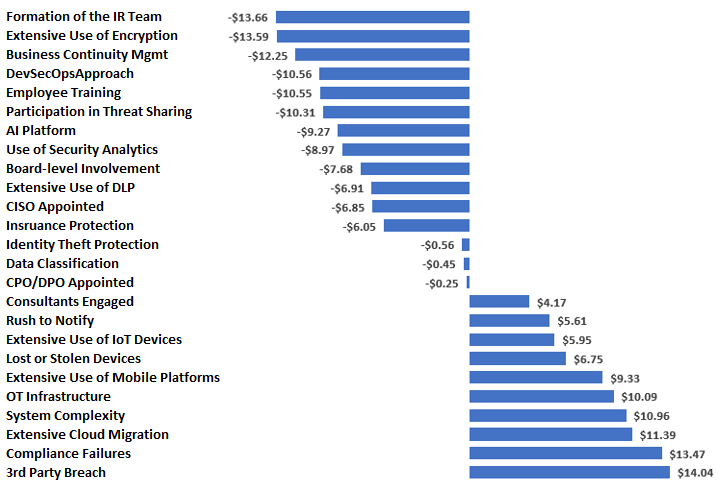 Also of note are activities that actually add to breach cost exposure, such as 3rd Party Breach and Compliance Failures;it pays to vet and audit the security of your vendors and remain compliant with regulatory requirements you may have.

Even though per capita breach costs have declined, presumably due to security controls and technologies being deployed, increases in threat actor activity have caused overall breach costs to rise over the past several years.  This demonstrates that more should be done to increase security program maturity.  Contact Cipher to let us tell you how we can help!